Cheesecakes are a delicious dessert but adding pumpkin just takes it to a whole new level. With this pumpkin spice cheesecake every bite is tasty (and pretty).

Pumpkin pie and cheesecake are two great desserts, but when you combine them they become a mindblowing treat on their own. Add in the pecan and gingersnap crust and you have yourself a dessert no one can resist.

This is the best pumpkin cheesecake recipe because it's so simple and easy to toss together. Not only that but you can get pretty creative with those fun pumpkin swirls on top!

Serve this cheesecake up to friends, family, and guests this holiday season, or freeze it in slices so you can enjoy a tasty treat when the mood strikes. Both ideas are pretty great.

For the gingersnap crust you will need:

I personally love the crust with the pecans chopped and mixed into every bite. You can buy pecans prechopped from the store or toss them in a food processor for a minute to become a finer crumb. The nutty flavor really helps bring the pie together.

Double-check on the cheesecake as it gets closer to the end of the baking time to see if it's doing alright. You want your cheesecake to look set around the edges and slightly puffed in the center. The center will fall as the pie cools.

Can I freeze pumpkin cheesecake?

You can freeze your cheesecake in an airtight container for up to 2 months! Perfect for planning ahead during the holidays! Just thaw overnight in the fridge before serving.

How long is pumpkin cheesecake good for?

Cheesecake if stored properly in the fridge can last up to 5 days. It's best to keep it wrapped well with plastic wrap to help avoid it from drying out and to lock-in that moisture.

What do eggs do to cheesecake?

Eggs inside of cheesecake batter help to work as a binder as well as adding a smooth and rich texture throughout the pie.

Is cheesecake still jiggly when done?

When your cheesecake is finished baking the edges should be firm and set while only the center part is slightly jiggly. The surface of your cheesecake should also not look shiny as that's a sign that it isn't finished yet.

How to make pumpkin swirl cheesecake

Preheat your oven to 325 degrees F.

In a bowl combine all of the crust ingredients and mix well to combine. Press into the bottom of the springform pan or pie plate.

In a large mixing bowl, combine the cream cheese, sugar, and vanilla until smooth.

Beat in the eggs, one at a time, mixing well after each addition.

In another bowl, combine the pumpkin, cinnamon, cloves, and nutmeg.

Spread the cheesecake batter over the pie crust.

Dollop the pumpkin mixture over the cheesecake batter and then spread it around with the backside of a spoon until the swirled design is to your liking.

Bake for 35-40 minutes until the center looks almost set.

Allow to cool and then place the cheesecake in the fridge for at least 3 hours before slicing and serving. 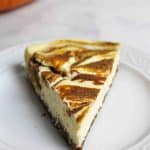