Published: Sep 20, 2021 by Nicole This post may contain affiliate links. 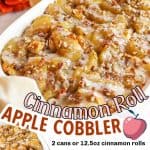 This cinnamon roll apple cobbler only needs 4 ingredients to make it. It's the perfect addition to breakfast or dessert this fall and very quick to throw together too. You're going to love this fall-flavored treat.

Cinnamon rolls and apples are two flavorful things that just go well together. Spices and apples have been a fall favorite for decades, if not longer.

Made with canned cinnamon rolls and a container of your favorite apple pie filling, you can easily create this fall treat in your own home.

See what you've been missing out on and why you can't live without this tasty dessert-like dish. This apple cinnamon roll bake will find a special place in your heart to make its own.

I love the sweet and juicy apples bursting with flavor and crunching next to the soft spiced cinnamon roll pieces. Top it off with icing and maybe a sprinkling of chopped pecans and you're really in for a good time!

For the exact amounts needed, please see the recipe card below.

Check out how to make cinnamon roll apple cobbler with these simple step-by-step instructions:

Preheat your oven to 350 degrees F and grease the inside of a 9x13 baking dish. Set it aside.

Open your cans of cinnamon rolls and then remove them from each other so that they are all laying flat on a cutting board. Slice each one into quarters and then place it into your baking dish in a nice and even layer if possible.

Drizzle the melted butter over the top of the cinnamon rolls.

Spoon your apple pie filling nicely over the top, trying to spread out the apple chunks and filling as you can so that each piece will have a good amount of everything.

If desired, you can sprinkle ¼ cup of chopped pecans over the top of the cinnamon rolls at this point.

Bake in the oven at 350 degrees F for 1 hour and remove from oven. Check the center cinnamon rolls to see if they have finished cooking through and if they have, set the pan aside for 10 minutes to cool.

Open a packet (or both packets) and drizzle the icing over the top of your apple cinnamon roll cobbler.

As my husband pointed out to me, this is more like a cinnamon roll apple pie filling monkey bread instead of a traditional cobbler as you may be trying to picture it. But whether you consider this an apple cinnamon monkey bread or a cobbler, it still tastes delicious.

When you go to check to see if the rolls have finished baking properly, make sure to take a small piece out of the center to test for doneness as the apple pie filling could cause some cinnamon roll pieces to remain gooey from the excess moisture. I didn't have this problem but it is still a risk for bigger cinnamon rolls.

If you find your cinnamon rolls are still too gooey or undercooked, just add 5 minutes to the baking time and then test again. Repeat until cooked through. Allowing the dish to cool for 10 minutes helps to thicken the filling and finish the cooking process.

Yes, this apple pie cobbler will need to be kept in the fridge when not being eaten. This will help to ensure that it is still fresh and safe to consume when ready. If you would like to enjoy it warmed through, simply place it in the oven or microwave for a few minutes to warm it up. That said, this cinnamon roll apple pie filling cobbler tastes great when chilled too.

This cinnamon roll apple cobbler only needs 4 ingredients to make it. It's the perfect addition to breakfast or dessert this fall and very quick to throw together too. You're going to love this fall-flavored treat.
Prep Time 5 mins
Cook Time 1 hr
Cool 10 mins
Servings: 8
Calories: 178kcal
Cost Recipe $5.54 / Serving $0.68
Prevent your screen from going dark

Checking for doneness. Storage.   *Nutrition facts does not include pecans.

I'm Nicole and I am the owner and recipe developer here at Beeyond Cereal. I love saving money and one of the best places to trim expenses is in the kitchen. With this site, we are serving up tasty and frugal homemade dishes that the whole family will enjoy.