If you're looking for a simple and easy breakfast that's as spooky as it is festive, look no further. With just 2 ingredients and a few minutes of effort, you can have a delicious breakfast that ignites a fright at the table.

I love making spooky and fun treats for my kids I even do it all year long- at their request). It's so much fun and it's a great way to add a little "something extra" to a normal food routine.

While we don't eat canned cinnamon rolls often, they are almost always finding their way into our shopping carts (especially is I shop with my husband and kids). We like to keep them on hand for busy weekends or turn them into something creative like these zombie guts cinnamon rolls.

While my daughter says these edible guts look more like zombie brains, I think it can easily go either way depending on how you position the rolls in your pan so whether you're looking forward to eating intestines or brains, go for it! You'll have a blast!

While I have no doubt that you have your own favorite brand or type of canned cinnamon rolls there is something that is important to note. Don't use Pillsbury unless you know that they unroll.

The brands I have the best luck with happen to be the cheaper store brand stypes and the more expensive ones like Annie's. Any would work, as long as it can be unraveled. Bake time and the temperature is 100% dependant upon the wrapper's instructions for cinnamon rolls, so bake according to package, after "surgery."

So with that in mind, enjoy this cinnamon roll guts recipe!

They will! Just bake them at the specified time and temperautre on the pacakge and follow along with the steps to make them look spooky!

The blue will add a better hue to the icing to make it slightly more realistic. I always think of intestines as being more purple in color thanks to the blues and reds in our body, if desired you just keep it red, but without the blue, the red will be very vibrant- like Santa's red suit.

How to Make Cinnamon Roll Intestines

Preheat your oven to the temperature requested by your canned cinnamon rolls.

Grease a 9x13 baking dish and open/unravel the cinnamon rolls. Lay them in the pan in back and forth zig-zag motions making them look like lines and blocks. Leaving gaps between thw rolls is okay.

Bake for the specified time directed on canned cinnamon rolls.

Remove from oven and allow to cool while you prep the icing.

In a bowl mix the icing with red food coloring. Add in a small amount of blue ( a little goes a long way) and then add in more red until the desired color has been reached.

Spread the icing over the rolls and fill in the nooks and crannies. I found that a pastry brush is very helpful with this. 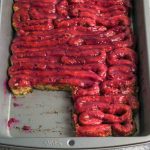 If you're looking for a simple and easy breakfast that's as spooky as it is festive, look no further. With just 2 ingredients and a few minutes of effort, you can have a delicious breakfast that ignites a fright at the table.
Prep Time15 mins
Cook Time15 mins
Total Time30 mins
Course: Breakfast, brunch, Dessert
Cuisine: American
Keyword: Cinnamon roll intestines, Halloween cinnamon rolls, spooky cinnamon rolls
Servings: 8
Calories: 37kcal
Author: Beeyond Cereal