A savory breakfast quiche is always a welcoming breakfast. With bright green spinach leaves, crispy and chewy bacon, and a lot of cheese, this spinach bacon quiche really hits the spot on appearance and taste!

This quiche packs a cheesy combination of bacon and cheddar and parmesan cheeses into every bite. Bacon and cheese? Yes, please! Of course, we toss in fresh spinach leaves, onion, and green onions for color and added nutrition so it's not all fun and games.

I love making quiches around here. It's one of the low-maintenance breakfasts that I toss in the oven when my husband says he's on his way home in the morning (he works nights) and by the time he's home it's hot and ready.

Not only that, but I can use up any number of vegetables or meats in my fridge and pantry. A frugal way to clean house before payday and a good way to get my kids to want to eat their veggies!

This bacon spinach quiche recipe is among our top favorite quiches, ranking right up there with the Smoked Salmon Spinach Quiche recipe I posted a few months ago.

Making a quiche is easy especially with a store-bought crust, but you can always use homemade if preferred! I like less effort in the morning, at least until the coffee kicks in, ha!

You should be able to do the "clean knife test" in the center of the quiche and it should look set on top, especially around the edges. There might be a slight jiggle when you shake it, but it definitely should not slosh around.

Also, the requested wait time after it's baked is for the cheese and eggs to solidify and cool down enough that our slices don't fall apart. Like any pie, having a moment to cool down helps it to set up which helps with the ease of serving and makes for a nicer presentation.

Can I use frozen spinach?

You can! Thaw your spinach and then drain and squeeze out as much moisture as possible before adding it into the egg mixture. Also, when adding it, try to break it up with your hands so that there aren't huge clumps of it and it can be more evenly distributed.

Can I use something besides milk?

You can swap out the milk for unsweetened almond milk if you want it to be dairy-free or you can use a nondairy alternative of choice. Half and Half as well as heavy cream also work well too (for those looking for dairy alternatives)!

How to Make Spinach Bacon Quiche

Preheat your oven to 425 degrees F.

Pierce a storebought frozen deep-dish pie crust several times along the bottom and side. Bake in the oven for 10 minutes and allow to cool.

Dice the onion and chop your bacon. Cook them in a skillet over medium heat for 5 minutes until the bacon is cooked and the onions are translucent. Remove from heat and set aside.

Beat the eggs with a fork in a large mixing bowl.

Add in the milk, salt, pepper, and mix again.

Add in the spinach, green onion, and the onion bacon mixture as well as the cheeses. Stir together until combined.

Pour the mixture into the baked pie crust. It's okay if you don't need all of the egg mixture.

Bake in the oven at 425 degrees F for 15 minutes. Reduce heat and bake for an additional 25-30 minutes at 325 degrees F until a knife can be inserted into the center and come out clean.

Let rest and cool for 10 minutes before slicing and serving. 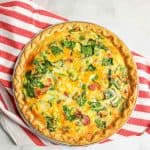