This vegan apple bundt cake is loaded with fall favorite spices like cinnamon, nutmeg, ginger, and cloves. Enjoy this dessert while watching the leaves fall outside or serve it up on a holiday table because this cake is too good to keep to yourself! (Though you may try).

Made with chunks of fresh apples and filled with warm spices, this cake is packed with flavor in every bite. The soft and moist texture and crumb of the cake is also something that will have you stopping mid-bute to say “wow, this IS good.” Or at least, that’s what it would do if you were my mother in law haha.

I’ve served this cake to my husband’s family and despite no one here being vegan, not a single person missed out on anything. This cake was well received by everybody and some even asked for seconds.

While this cake is made with no eggs or milk, this cake is still very moist and lasts that way for days if stored properly.

For the Spiced Powdered Sugar Glaze, you will need:

You can use any apple variety of choice but I recommend sticking with a good baking apple variety such as Granny Smith, Honeycrisp, or Gala. These will hold up better while being baked and won’t turn grainy.

Make sure to remove the peel of the apples and slice them into 1 inch or smaller-sized chunks. These apples will be sliced when the cake is served and will be soft enough to cut with a fork when you go to take a bite, so it’s okay if they’re not that small but you don’t want them to be so large that they don’t fully cook through.

Another thing to note is that the apple pieces will naturally float to the top of the cake so that when inverted the apple pieces are on the bottom of the cake. You can make them more scattered by cooking the apple chunks for about 2-3 minutes in the microwave and allowing them to cool before using.

Apples when raw have more air in them and will cause them to rise and through a lot of trial and error, I found that cooking them, even just a little bit, can help to keep them down.

Can I make this vegan apple cake in a 9×13 pan instead?

If desired you can make the cake as directed but pour it into a prepared 9×13 baking dish. It should cook in about 40 minutes, but double-check with a toothpick for it to come out clean before removing the cake from the oven. After the cake has cooled, you can top it off with the spiced icing.

How long is vegan apple bundt cake good for?

If kept properly covered at room temperature, this cake can last about 3 days and still be great. For a slightly longer storage solution, you can keep the cake well covered in the fridge for about 5 days to a week.

Preheat the oven to 350 degrees F and prepare your bundt pan by greasing the inside and coating it with a light dusting of flour. Set aside.

In a small bowl toss the apple chunks together with 1 tablespoon of flour to coat, and then set it aside.

Combine the flour, salt, baking soda, sugar, and spices with a whisk in a large mixing bowl until well blended.

Fold in the apple chunks until well mixed and then pour the batter into your prepared bundt pan.

Bake in the oven for 35-40 minutes or until a toothpick can be inserted and come out clean.

Allow the cake to cool for about 15 minutes in the pan before turning it over onto a wire cooling rack to cool completely.

Once the cake has cooled prepare the icing by whisking the ingredients together until smooth.

Drizzle the icing over the top of the cake and allow to set before slicing and serving. 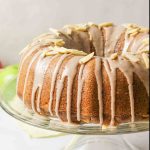 You can use white vinegar or apple cider vinegar depending on what you have on hand. 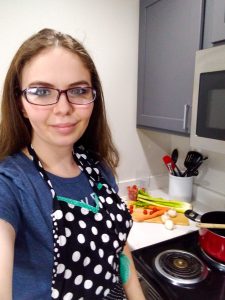 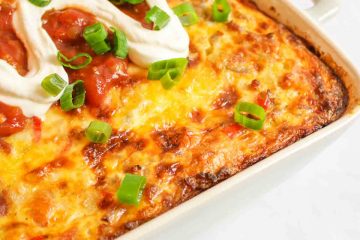