This clone of a Cinnabon cinnamon roll recipe is one that you're going to want to keep on hand forever. Pull it out to impress guests, around the holidays, or whenever the mood strikes. It's so gooey, sweet, soft, and practically melts in your mouth!

I could go on and on about this clone of a Cinnabon recipe here, but I think it's better to just show you why it's great instead.

I originally found the clone of a cinnamon roll recipe on Allrecipes, and while it was close as-is, I felt I could do more to improve it and get close to the actual Cinnabon that I know and love.

So I made a few adaptions and I have got to say, it's the closest that I have ever been to replicating it.

You can make this Copycat Cinnabon Cinnamon Roll recipe by hand or in a bread maker depending on what you feel like using!

With a family of 4, these dozen rolls don't last long. My husband usually eats a few at a time (and he isn't a big sweets person).

So that alone should tell you that this bread machine cinnamon roll recipe is pretty irresistible!

For the dough you will need:

For the filling you will need:

For the frosting you will need:

For specific quantities, see the recipe card below.

Okay, so the cinnamon rolls will begin to brown around the 14 minute mark when baking if you don't want them as dark as my pictures show, make sure to keep an eye on the rolls as they bake.

When they reach the desired color, take a piece of foil and gently lay it over the top of the rolls as they finish baking. you don't need to tuck, bend or do anything fancy just lay a sheet over the top and you're good to go.

Be careful though as the oven is hot and they go from gold to brown in the blink of an eye.

For more "Cinnabon-like" cinnamon rolls, make sure to use margarine in the dough filling as that is what they use. Cinnabon also uses a different variety of cinnamon that you can't find in stores. So if you want a more authentic flavor, order some Makara Cinnamon and use it. Otherwise, this is about as close as you can get with what's in grocery stores.

What is bread machine yeast?

Bread machine yeast is an active yeast sold in stores in little glass jars in the baking aisle. Some times its a cheaper option than buying the packets individually but it's exactly the same thing as what's in the active yeast packets and you can use either.

Why is there heavy cream added to the pan?

The heavy cream is an optional ingredient and step but it is one that helps to give the cinnamon rolls that golden brown color and the gooey centers. It helps to keep the moisture in the pan so that they turn out a little lighter and fluffier. But once again, totally optional. I make it both ways and they're great with and without.

How to store cinnamon rolls

If your cinnabon rolls have been frosted with the cream cheese frosting then I highly recommend keeping them stored in an airtight container in the fridge for food safety reasons. They can last up to 5 days this way, but we all know cinnamon rolls taste best when fresh!
Note that if you want them to feel fresh and warm again 30-45 seconds in the microwave should do the trick!

Can I use bread flour?

Yes you can! Bread flour may even give you a little fluffier of a bread roll when it's done too. All purpose flour is great because it's so easy to get your hands on, but bread flour is awesome when it comes to baking bread.

Why do I have to whip the frosting for so long?

Okay, maybe you can skip a few minutes- but the goal is to get it light and fluffy. You know Cinnabon has those little containers of whipped frosting to buy and that they cover their rolls in it too, so why wouldn't we try to get ours to as close of a match as possible?

Check out how to make bread machine cinnamon rolls with these simple step-by-step instructions:

Included here are the bread machine instructions, but the printable card includes steps for those without one of these appliances handy!

Other delicious dessert recipes to try! 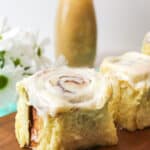 Without a Bread Maker