A super easy and tasty ham isn't too far away. With this minimal effort recipe, you can have more time relaxing while dinner slow cooks in the oven.

Ham is such a huge part of holiday meals whether it's Thanksgiving, Christmas or even Easter ham seems to find a way onto the table.

With this low effort ham recipe you can enjoy a sweet and tasty crusted ham without all of the stress and effort. Holidays are stressful enough, am I right?

With this honey orange ham glaze, you only need a few simple ingredients and a combined total of about 5 minutes of actual effort to pull this juicy ham meal together.

If you like a darker crust on your ham, after adding the glaze, crank the heat up to 425 degrees F instead of maintaining a constant 325 degrees F. This will brown it and cook it much faster (saves roughly 30 minutes).

If you want it to cook faster without becoming too dark, tent it with foil and turn the heat up to 425F after the glaze is added.

Basting the ham with the glaze and juices if optional and not required.

Make sure to allow the ham to rest before carving so that it stays nice and juicy!

If you're looking for a turkey counterpart to serve alongside this ham, check out my Dry Brined Herb Turkey or my Oven Roasted Cajun Turkey Breast!

When should you glaze your ham?

The glaze on a ham should be added within the last hour or half hour of baking so that it doesn't become too caramelized. This helps the flavor to adhere while keeping the ham from getting too dark in color..

What temperature is ham ready to eat?

Ham should be cooked to 145 degrees F before being eaten to make sure that it has been cooked properly and is safe to consume.

Can I freeze cooked ham?

Absolutely! After your ham has cooled down, cut off all meat from the bone and store them in an airtight freezer container. Freeze for up to 4 months, and reheat or use as desired within that timeframe.

Let your ham rest on the counter for 30 minutes and preheat your oven to 325 degrees F.

Using a paring knife score the top of the ham.

Place your ham flat side down on a rack inside a roasting pan. Fill the pan with about ¼ inch of water at the bottom.

Cook the ham for about 2 hours until the internal temperature reaches 130 degrees F.

In a bowl, mix together the honey, orange juice, orange zest, cinnamon, and cloves.

Pour your glaze over the ham and continue baking until the internal temperature reaches 145 degrees F in the thickest part.

Let ham rest for 10 minutes before carving and serving. 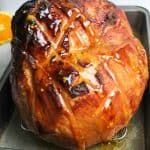